Aline Flores has a degree in Business Administration with orientation in marketing and finances from St. Edwards University in Austin Texas USA; She also has a MBA from Centro American Institute of Business Administration (INCAE by its acronym in Spanish) and currently she´s a law intern.
Flores is Executive President of Flores Group, a Honduran business conglomerate with multiple investments and more than 93 years in the automotive industry integrating more than 700 employees.
Nowadays Aline Flores has held the Presidency of Honduran National Council of Investments since 2014, and alternates as well as Coordinator of the Gender Committee of Sustainable Companies within the Honduran Council of Private Sector (COHEP by its acronym in Spanish)
In social and business fields, in not only Honduras but also internationally, Flores is well distinguished as President of Latin American Enterprise Council for Honduras (CEAL) since 2016 and President of Honduran Council of Private Sector from 2012 to 2016. She is member of the founding class of Central America Leadership Initiative (CALI) program of the Aspen Institute. Flores was also President of the Chambers of Commerce Federation of Central American Isthmus (FECAMCO by its acronym in Spanish 2011-2012).
President of Private Entities Federation of Central America, Panama and the Dominican Republic(FEDEPRICAP by its acronym in Spanish 2012-2013); President of Commerce and Industry Chamber of Tegucigalpa (CCIT by its acronym in Spanish 2009 -2012).
Because her successful business track and contribution to society Flores has been recognized with outstanding awards like “Exemplary Businesswoman 2008-2009” (CAMACOL) and also with Liquidámbar Sheet (October 2010) which is the maximum recognition to citizens and institutions highlighted by its contribution in different development fields given by Tegucigalpa municipality and awarded by Municipal Corporation of Central District.
In 2014, Aline Flores was chosen by “El Economista” magazine as Businesswoman of the year. In 2015, 2016 and 2017 Forbes Magazine, choose her as one of the most influential 50 women of Central America
Flores has participated in many conferences and entrepreneurial forums in Honduras and internationally showing foster enterprise and private investment as a key factor for Honduran social and economic development. 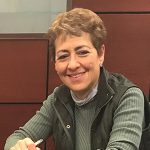