Magdalena Valdivieso Ide received a degree in Public Administration with a specialty in Foreign Service from the Universidad de Chile, as well as a PhD in Sciences, specialising in Political Sciences, from the Universidad Central de Venezuela.
She has been a teacher in various institutions of higher education both undergraduate and graduate, and has been Chair of Gender and Public Policy at the Institute of Public Affairs of the University of Chile, and the Coordinator of the International Course: Public Policy, Justice and autonomy of women in Latin America and the Caribbean, CIM, MESECVIC, OAS, CLACSO. She has been a member of several working groups, among which she stands out as Coordinator of the Clacso Feminisms Working Group, transformations and alternatives in LAC. Also as a researcher, she has managed and coordinated projects aimed at understanding and transforming the inequality situation of women for various agencies and non-governmental entities in Chile and other countries.
She is also the author of the book Women and Politics in the Process of Venezuelan Emancipation: The Ignored Participation of the “Virtuous Citizens” (published by Editorial Académica Española) and of publications in various specialized journals in gender and feminisms of Latin America and the Caribbean. She has also been an exhibitor at several international conferences and seminars.
Since 2014, she has acted as Advisor to the Director of the National Service for Women, Claudia Pascual Grau, and since June 2016, she has assumed the position of Head of the Equality Policy Division of the newly created Ministry of Women and Gender Equality, from where she leads various actions for the design and implementation of public policies. 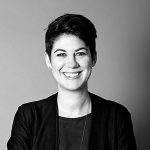