Lic. Zulphy Santamaría, Vice Minister of Labor and Labor Development. Collaborates directly with the Minister in the exercise of his functions, replacing him in his temporary absences and assuming the attributions and responsibilities entrusted or delegated to him; endorsing the resolutions that must be signed by the Minister; coordinating and supervising the substantive bodies subject to the projects, programs and norms that govern the activities of the Institution.
Dr. Santamaría has a degree in Law and Political Science, title awarded by the University of Panama with the Sigma Lambda distinction. She has a Master’s Degree in Business Administration from INCAE Business School and a Master’s Degree in Electoral Studies from the Specialized University of the Americas.
Ms. Santamaría was appointed Vice Minister of Labor and Labor Development on July 1, 2014. Previously, she served as the Director of the regional firm Corporate Legal Consultancy 2004 – 2014. She worked in the Legal Department of the National Directorate of Migration and Naturalization of 2013 to 2014.
In her political career she has occupied the position of President in Charge of the People’s Party, National Vice-President, National Under-Secretary-General, National Secretary of Communication and National Under-Secretary of Youth. 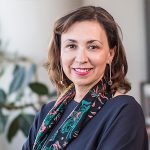